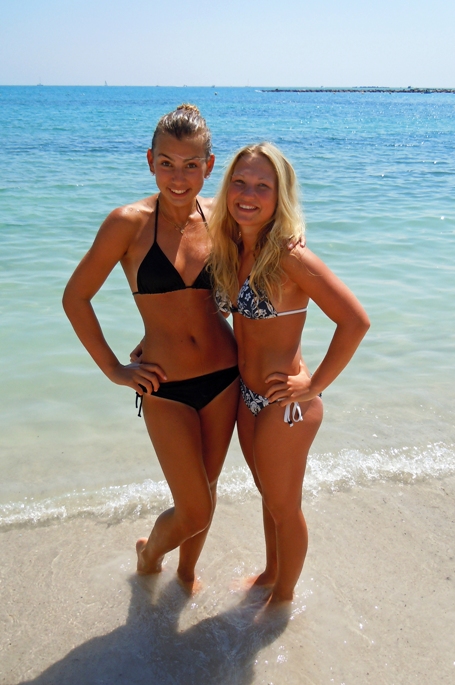 Trip to Nice today after school – nice! Okay sorry, I should stop making bad jokes… But you know, you have to say Nice was nice if you’ve spent your day there… 😉

Anyway, shall tell you ’bout yesterday and today. You know, two more girls have moved in to our house, D (just because I can’t spell her name we’ll call her just D), who’s from Ireland, and Reem, who lives in Australia, but comes from Iraq… Or lives in Qatar and has lived in Australia… Or something like that. Well, they’re very nice anyway. Yesterday night me and Sophie went out with D (’cause Reem hasn’t turned sixteen yet so she’s only alloud to be out ’til 19.30) and we met the Stockholm-guys, Niall from Ireland, a spanish guy and some german boys at Place du Gaulle, and we spent our night with them – really nice.

Today, we had school and then we went to Nice by bus (only one euro for three hours – so good!!) with Marco and Timo, two german guys. I bought two shirts and a pair of shorts, plus ice cream and train tickets. I’ve been eating lots of ice cream during my stay here… But hey, it’s vacation 🙂

Now me and Sophie are sitting in the school using the Internet. Dinner in an hour at home. Tomorrow is our last whole day – we’re gonna spend it at the beach and then go home for dinner and fixing and then back to town for our last night here in wonderful Antibes. At saturday we’re going home… See you soon, kiss!

Okay think it’s time for an update now, isn’t it? Promise to not write long this time. I’ll try to. Honestly.

Anyway, today is wednesday and for every day, I realize more and more how good it is here and that I don’t want to go home. Accept for the food (it isn’t that bad but I miss my mum’s cooking…) everything is just awesome and I’m not longing home at all.

Last time I wrote  was this friday, and since then we’ve been doing what you use to do down here; be at the beach in the sun; trying to get a tan (it’s pretty good by now!), sailing, lot’s of walking… Well, and I don’t have time to tell you more ’cause now we’re going to the sea. Smell yah later!

Ok, just so you know, I will write in English ’cause it’s really annoying to write in Swedish when you don’t have the last letters… So here we go, in English (I’m not so good in french that I can blog in french…)

So, after six days without Internet we’ve finally fixed it. For five euro we got an acces here on the school for seven days, so I hope I will be able to blog some more during the rest of our stay here in Antibes, France.

The first day when we arrived, which was Sunday the 12th, it was very hot and sunny. Our hostfamily got stuck in the traffic on their way to the airport, so when we arrived there was noone there to meet us and we got pretty worried. But after about 30-40 minutes our host-mum and -dad picked us up and they drove us to their house in Antibes. And they started to speak French with us the first thing they did. We thought that maybe they would speak some English if we didn’t understand but nono, only French! Which is good of course, but a little drastic for us. At the house, we ate dinner at half past seven, pretty late, we packed up our bags and we took a swim in the pool.

The hostfamily is pretty nice. There’s a mum, a dad and two twingirls. We thought it would only be one girl but it turned out to be two! 🙂 They are very thin, these girls, very thin. The mum doesn’t eat that much either and she’s pretty nice but a little bit scary. The dad is very sympatic and nice to talk to (or, he talks to us and we try to understand what he’s talking about – most of it is hard to understand but we catch some things! Feels like we’ve learned to listen and understand better here, maybe a little bit talking too. But before we came here I thought I didn’t know that much French, but actually, with this French I know, I could be on vacation here and be able to communicate without any English and that’s pretty good! 🙂

On monday we went down to the beach since we were free from school – this was a public holiday in France. We lay on the beach the whole day and it was very hot and sunny and we had to get down in the water all the time. And by the way, the sea is very nice, totally blue and more than 22 degrees I guess. This day, we ate our first breakfast at house – one cup with hot water (we cqn choose between nescafè or tea) and then totally white bread with strawberry jam or nutella. Pretty far away from the breakfasts we’re used to, but it’s just to ta sedeln dit man kommer. For lunch, we got a picknick – baguette with something mysteriously similar to leverpastej. We vwere pretty hungry at the evening as you understand. At the evening it was a welcome party and we met some Swedish guys we talked to.

Next day was french test in school, it wasn’t too hard but not too easy either. Me and Sophie and one of the Swedish guys came in the same group, which also a nice guy from Ireland did, and some german kids. And le petit Slovaque aussi. At the afternoon there was a little tour in Antibes, they showed us around and then we had freetime and of course we lay on the beach trying to cover our burns from the day before… ops!

Wednesday was the first real day in school. At the afternoon we went sailing for an hour, really nice, and then the beach at the afternoon when we spoke with two finnish/swedish girls. At the evening we were actually aloud to go out until eleven but we were so tired in out legs – it takes about 15-20 minutes from our house to the school and then 15 minutes from there to the beach, and then 30 minutes back to the house again, so at least one hour of walking every day!

Yesterday (thursday) it was school, we did some interviews with people in the town, and in the afternoon we went to Monaco by train! Very cool city – and very expensive. It was so beautiful? fantastic view with the beautiful blue sea in the background. Lots of expensive cars like Jaguar and Ferrari and also enormous boats bigger than houses which were private-owned. The young leaders are very nice and flirty, we like it 😀

Today we’ve been for school and then we went to a beach a little bit further away, with some germans. Unfortunately this is the first day when the weather is not splendid – a few raindrops before and a little bit windy but it was nice to get to know the germans.

Now we’re back at the school and Internet but we’re leaving home now to eat and fix us til the evening when we have permission to be out until one in the morning. Hope to be able to write again soon. Sorry for such a long entry but I know that my mum wants to know how things are here so here you go mum 😉